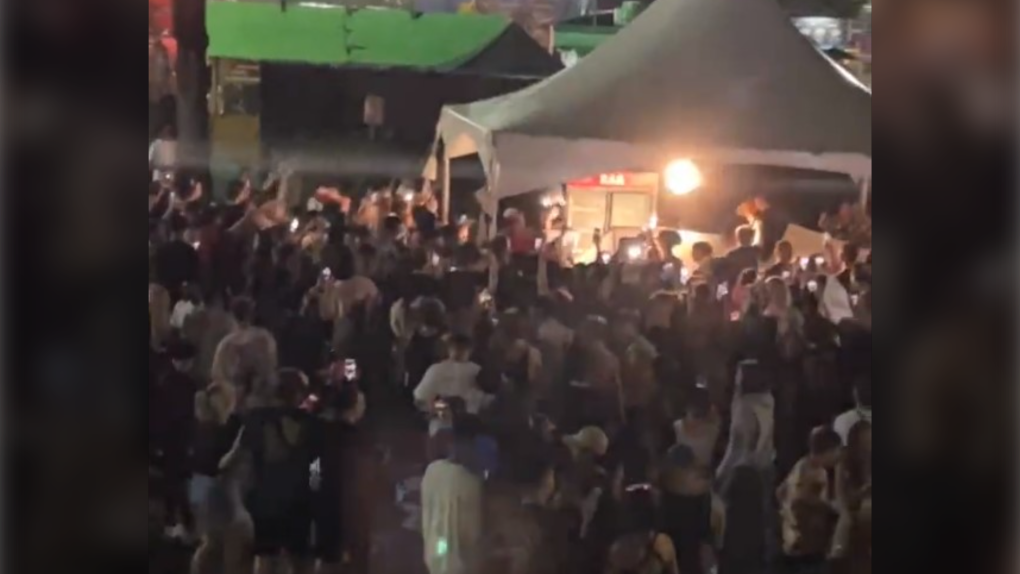 A riot erupted at a music festival in East Vancouver Sunday after headliner Lil Baby cancelled his performance shortly before he was scheduled to take the stage.

Organizers of the two-day Breakout Festival posted a statement to Twitter saying Lil Baby was “too sick to perform” and that partial refunds would be offered.

“We know you were looking forward to seeing him but these circumstances are beyond our control,” the statement said.

Other videos show the crowd booing while the statement was read onstage by an organizer.

The PNE said the decision was made immediately before the headliner was scheduled to begin, and that staff members were not informed of the change until Lil Baby had left the scene.

A witness who recorded several videos of the ensuing riot told CTV News the scene was “complete chaos.”

“I’ve never seen anything like it, to be honest. It was just a bunch of out of control kids,” said Matt, who asked that he only be referred to by his first name.

He estimated the violence went on for approximately an hour, and only stopped because the rioters ran out of things to break.

There were approximately 5,200 people inside the venue for the festival, and officials estimate about 1,000 of them remained at the PNE after the headliner’s cancellation, causing hundreds of thousands of dollars in damage to the interior of the Amphitheatre and to the surrounding area in Hastings Park.

“It is our understanding that there was additional damage to property outside of Hastings Park, in the community and to local businesses. For this we are incredibly sorry to our neighbours,” the PNE said in a statement.

Vancouver police confirmed they arrested seven people in connection with the riot.

“Dozens of extra officers were redeployed from other areas of the city to restore order, with some officers having bottles and other objects thrown at them.”

No injuries were reported.

Along with vendor kiosks and garbage cans being overturned, tables, tents and fridges were knocked down and thrown, police said.

“We will conduct a full and thorough investigation into the actions of anyone who destroyed property, put concert-goers in danger, or committed other criminal acts,” Visintin added. “Though this investigation will take time, we will pursue criminal charges against people who participated in this violence and destruction.”

The PNE said it would be working with the promoter of Breakout Festival, Timbre Events, and their insurance provider to ensure the “complete and timely repair” of all damage both on and off the property.

Several other last-minute changes were made to the festival lineup. On Sept. 13, organizers announced Lil Uzi was no longer able to perform “due to unforeseen circumstances.” Then, on Sept. 16, another notice on social media said Polo G and Sofaygo would not perform either.

This site uses Akismet to reduce spam. Learn how your comment data is processed.

We are Toranj Media, a leading modern media company. We guide our audience from discovery to obsession.